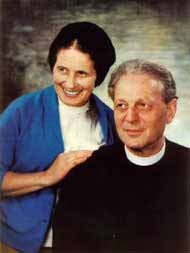 Christian Wölfkes prayed for years to win a Jew for Christ. One day in 1937, a young Jewish man and his wife arrived in his village in Romania. Wölfkes shared Jesus with Richard and Sabina Wurmbrand, leading them to Christ. Their conversion to Christianity came at a time of increasing unrest in the world, and soon they faced the choice of standing firm for Christ or compromising on their beliefs.

In 1945, approximately 4,000 religious leaders in Romania gathered to swear loyalty to the new Communist regime. Richard, urged on by Sabina, stepped forward and boldly stated that the duty of a Christian is to glorify God alone. Three years later, he paid the price for this decision when he was arrested by secret police and placed in a solitary cell. Sabina was arrested two years later, leaving their eight-year-old son, Mihai, alone.

In total, Richard spent 14 years in prison. While imprisoned, he envisioned a ministry that would focus on the plight of the persecuted Church, raise a voice on its behalf and provide encouragement and assistance to those suffering for their faith. In the mid-1960s, his dream became reality when The Voice of the Martyrs was founded in the United States.

While Sabina and Richard passed on to glory in 2000 and 2001, respectively, their faithful example of dedicated service to Christ—regardless of the cost—inspired thousands worldwide. Today, the Wurmbrands’ legacy lives on as VOM offices around the world continue their work in remembering and serving the persecuted Church. 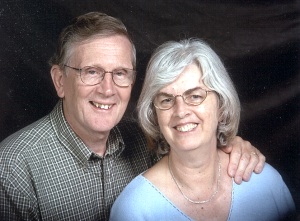 When Nellie Brobbel, a young mother of three, read VOM founder Richard Wurmbrand’s book Tortured for Christ, she was deeply moved by his accounts of steadfast faith amid suffering. Two years later, in 1969, she attended a rally for the persecuted Church where Richard spoke.

There, Richard noted how wonderful it would be if someone in Canada began working with the mission. Nellie wholeheartedly agreed—surely there was someone in attendance who could take on this important work. Then she immediately heard God’s voice: “Why not you?”

Nellie faithfully answered the Lord’s prompting. She started small—organizing rummage sales and speaking events for Richard—and before long her efforts proved fruitful. A VOM office in Canada officially opened in May 1971.

During the mission’s early years, Nellie’s husband, Klaas, looked after the mission’s bookkeeping alongside his regular job. Recognizing the need for a full-time director, he advised the board to seek a suitable person. The board, hoping Klaas would assume the role, urged him to pray and seek guidance from God.

Klaas received his answer at a New Year’s Eve service. While the pastor preached on the feeding of the 5,000, Klaas realized that Jesus was asking only for his one small talent. It was Christ alone who would multiply his efforts. The very next day, Klaas accepted the position as director of VOM Canada and served in this role until 2007.

The Lord has indeed been faithful in multiplying the efforts of VOM Canada’s early years. Forty years later, Klaas and Nellie are still serving the persecuted Church and thousands more across Canada have joined them in remembering those in bonds, as bound with them (Hebrews 13:3).