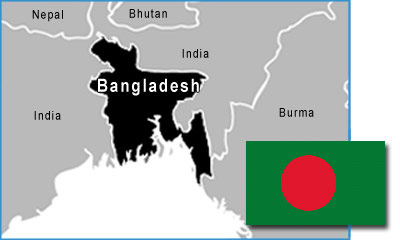 Bangladesh's history was greatly influenced by traders; Arabs and Persians in the 10th century, and Europeans starting in the 16th century. The country, once considered part of British India, was partitioned as East Pakistan. It eventually gained independence in 1971 after a struggle that resulted in thousands of civilian deaths.

Following the gain of independence, the country faced numerous coups until the first democratic elections in 1991. Since then, it has been governed by a democratically elected government, with the exception of a military-backed control during 2007 to 2008 in an effort to root out corruption.

Bangladesh is one of the poorest countries in the world. Churches are careful when offering relief to the poor and needy because they do not want to encourage false conversions among people who accept Christ solely for economic benefit. While Bangladesh is a Muslim majority nation, the government strives to remain secular. The government also actively fights extremism, which is prevalent. Many in Bangladesh are learning more about Jesus and the Bible through YouTube channels. Reports indicate that more than seven million people have watched Christian videos using this technology.

Many Christian groups meet publicly, while others worship in unregistered churches. Some Christian Bangladeshi groups often commission missionaries to do evangelistic work within their own country. However, when Muslims convert to Christianity, they are often forced out of their communities. While Bibles are available in many of the country's languages, they can be very difficult to find. And although it is legal to have God's Word, many inhabitants are too poor to afford the purchase of their own Bible.

Audio materials have proven to be fruitful in Bangladesh and, therefore, are the preferred means to evangelize and provide discipleship to new believers. As most of the country's citizens carry basic cell phones, followers of Christ are able to conveniently download the provided Christian study resources and listen to audio messages or Christian music without being posed to any danger.

Legal system
Based on English common law and Islamic law.

As the Word of God goes forth in Bangladesh through the Christian radio and television broadcasts, may the "Good News" of the Gospel accomplish mighty things in the lives of all who hear it! Pray that the seeds sown in hearts will take root and bear healthy and lasting fruit, and that the spiritual leaders of this country will be ready and equipped to disciple the resulting influx of new believers.