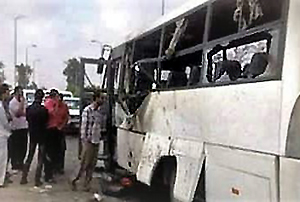 One of the buses that was attacked by gunmen.

On May 26th, armed gunmen opened fire, killing at least 28 Christians and wounding more than 20 others. The victimized believers were travelling on two buses and an accompanying SUV to attend services at the Monastery of St. Samuel in Minya, southern Egypt.

The convoy was stopped at 9:30 a.m. on a remote desert road near El Idwa, close to the border between two provinces. According to the Egyptian health ministry, eight to ten masked attackers wearing military uniforms blocked the vehicles as they were passing through the Minya region (about 200 kilometres south of Cairo). When the militants intercepted the vehicles at gunpoint, they forced all the travellers to hand over their money, jewelry and mobile phones.

Someone at the scene testified that the militants then ordered all the Christians to convert to Islam. "Bear witness that there is no god to be worshipped but Allah, and that Mohammed is the messenger of Allah!" they demanded. When the victims refused, stating, "We are Christians," the attackers opened fire, shooting most of them in the head. A number of children were confirmed among the dead, and all eight men in the SUV were killed.

Survivors of the attack noted that the black flag representing the Islamic State (ISIS) was displayed on the attackers' vehicles. The terrorist group has since confirmed their responsibility for the Minya attack. "This is a very sad (time) for Egyptian Christians and for our nation," explains one of VOM's in-country ministry partners. "Please pray for God's comfort for the families of those who died and are injured." Reports on other recently occurring attacks in Egypt, including the Palm Sunday bombings, are available at the Egypt Country Report.

Pray that any further wicked schemes of the enemy against Egypt's innocent and vulnerable citizens will be promptly intercepted, and that those who try to implement them will be under God's heavy conviction -- knowing deep within their hearts that it's wrongful to purposefully endanger the life of a fellow human being. Ask Him to minister needed comfort to the loved ones of the slain victims, and provide both physical and emotional healing to the wounded survivors. May each one be greatly consoled knowing that there is a wonderful place in heaven for all who acknowledge Jesus as their Saviour, the One who will ultimately turn tragedy into triumph.

VOMC works with international partners to provide a safe place of refuge, counsel and discipleship for Christians from Muslim backgrounds who have been forced to flee their homes due to religious pressure from their families, and/or experienced ostracization from others in their communities because of their identity with Christ. VOMC also helped fund an initiative that empowered persecuted Christian women by helping them increase resilience to daily discrimination and achieve financial independence so they can support their families.

Pray on behalf of those who are facing economic and social challenges because of their Christian faith. Ask the Lord to provide for their spiritual and practical needs – further strengthening and emboldening them so they can effectively share the message of the Gospel with others in their communities. May the hearts of those who hear it be open and receptive to the wonderful truths contained in God’s Word.

Egypt: Faithful To The End