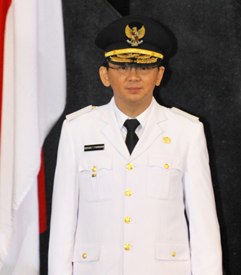 In a tense trial that was widely seen as a test of religious tolerance in the world's largest Muslim-majority nation, Basuki Tjahaja Purnama (popularly known as "Ahok"), has been sentenced to two years' imprisonment for alleged blasphemy. The May 9th sentence of the Jakarta governor was harsher than expected and has come as a shock to many of his supporters. TV news coverage of the scene outside the court showed some supporters weeping.

Ahok was charged with blasphemy after saying that clerics had used a verse from the Quran to mislead voters by telling them that Muslims were not allowed to vote for a Christian. He has denied any wrongdoing, explaining that he was not criticizing the Quran, but rather the clerics' interpretation of the verse. His lawyers plan to appeal the ruling.

Thousands of police have been deployed across the capital in case clashes break out between Ahok's supporters and militant Islamists who demanded he be sacked and jailed over the allegations. Although the Indonesian government was criticized for not doing enough to protect religious minorities, President Joko Widodo, a key ally of Ahok, had urged restraint over the trial and called for all sides to respect the legal process.

Pray for peace to reign in areas of Indonesia where tensions over the political controversy have fuelled strife among the country's citizens. May President Widodo, and those governing with him, respond with wisdom and diplomacy in order to bring about national unity and harmony. Also uphold Ahok as he faces harsh sentencing for a comment that has been misinterpreted. Ask that the ministering presence of Jesus will be with him, his family, fellow colleagues and supporters as they await the verdict of the appeal. As the Advocate mediates on his behalf (John 16:26), may Ahok's unwavering faith and courage be used as a testimony to many around the world due to the high-profile nature of his case.