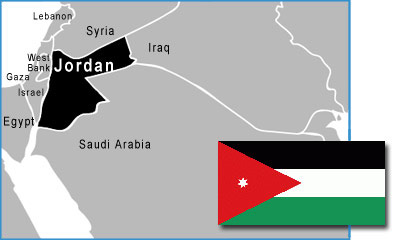 Jordan struggles with economic difficulties, unemployment and a burgeoning population. More than 100,000 Syrian refugees have fled to Jordan since the conflict in Syria began in 2011. Since July 2012, Jordan has settled all newly arriving refugees into one camp near the Syrian border. The refugees are prohibited from leaving the camp, which has led to rioting.

Islam is the official religion, but the state generally supports religious freedom. The constitution allows citizens to practice religion freely unless it "violates public order or morality or conflicts with Islamic law." Traditionally, Christians have had few difficulties in Jordan, and even quiet evangelism has been allowed. However, Christians in Jordan, both natives and refugees, increasingly face persecution from their families, employers and society. In recent years, there has been an increase in the number of "honour killings" of Christians, wherein a Muslim family kills a family member for leaving Islam. Many traditional Christians have left, but the number of evangelicals continues to grow as people come to Christ. With Islamist movements sweeping the region, Jordanian believers fear similar developments in their own country, and they have asked for prayer.