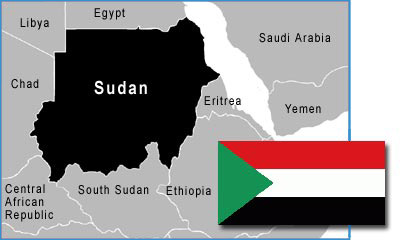 The civil war, which ended in 2005, claimed the lives of two million people. A continuing conflict in Darfur has driven two million more from their homes and killed over 200,000. Sudan and South Sudan split into two separate countries in 2011; and, according to USCIRF, "conditions in Sudan have deteriorated since South Sudan's independence." USCIRF has designated Sudan a Country of Particular Concern since 1999.

In Sudan, Christians face poverty, war and genocide. Arab-Sudanese are trying to eradicate black Sudanese in the Nuba Mountains, where Christian villages face daily bombings by the Sudanese military. The government is trying to eliminate all Christian villages, churches, hospitals and schools in an effort to Islamize the country. Although the constitution guarantees religious freedom, Islam remains the de facto state religion, and apostasy is punishable by death under the government's Shariah law. Muslims are given preferential treatment, and non-Islamic proselytism is prohibited. It is difficult for Christians to obtain permission to build churches. Converts face social pressure and harassment from security services. They typically do not stay in Sudan.