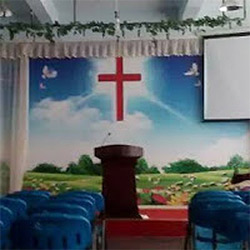 A Chinese house church has been ordered to close down by local officials in Dazhou, Sichuan province. According to our sources, it is not surprising to see such actions taken by the Communist Party of China as they continue to juggle the massive rise in Christianity among their citizens.

However, members of the house church are questioning the legality of the closure. In regards to the official registration of churches, Chinese regulations specify that if a congregation consists of fewer than 50 people, registering with the state is not required.

The Chinese church has faced a multitude of persecution cases over the years. The most recent include the systematic removal of crosses and church buildings in Zhejiang province, which has seen approximately 1,500 crosses removed and nearly 400 buildings destroyed. For a previous report on this situation, please go to this page.

During this time of heightened opposition in the Sichuan and Zhejiang provinces, may the Lord grant additional courage and strength to the members of the house church facing forcible closure as they present their case to governing officials. May those representing the church members have the wisdom and direction required to effectively mediate on their behalf. Ask that the hearts of the officials be receptive to God's promptings and justice so His people are permitted to freely worship Him in spirit and in truth. Also pray that the house churches in China will function together with a greater sense of unity (Psalm 133:1; John 17:23), and that the anti-cross campaign in Zhejiang province will cease and thus prevent any further demolition of churches.

To post a prayer on behalf of the persecuted church, please go to VOMC's prayer wall.

In 2018, The Voice of the Martyrs Canada helped to distribute 10,000 Bibles for Christians in the country, making it possible for them to have their own printed version of God's Word. VOMC also provides legal assistance for those facing prison sentences and related fines due to their faith, as well as professional counsel for other believers in need of advocacy. Additionally, VOMC works with various mission partners to facilitate a Biblical understanding of persecution, while presenting ways to effectively respond and minister within the context of hostility.

Pray that the Gospel will be proclaimed throughout China without government interference so many more names can be added to the Lamb's "Book of Life." May there also be a spirit of unity demonstrated among the country's growing churches, further strengthening existing believers and spurring them on in their ministry service and evangelistic outreach within the country's numerous communities.

China: Persecution Against Christians is Increasing