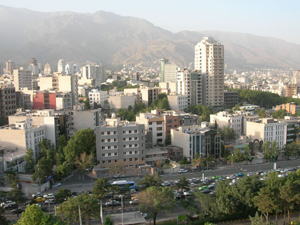 On July 3rd and 4th, ten-year jail terms were handed to Pastor Victor Bet-Tamraz (an Assyrian) and three Persian converts associated with his ministry. Though the authorities closed the pastor's Tehran church in 2009, the Christians continued to meet in house fellowships. Pastor Victor and Persian converts Kaviyan Fallah-Mohammadi and Amin Afshar-Naderi had been arrested along with several believers at a Christmas celebration in 2014. (A previous report on the situation is available here.)

The other sentenced convert, Hadi Asgari, was arrested with fellow believers, including Pastor Victor's son, Ramiel, at a picnic in August 2016. Ramiel, has been charged with "organizing and creating house churches" and "action against national security." Pastor Victor and all three Persian converts were deemed guilty of "conducting evangelism," "illegal house church activities" and "acting against national security."

Amin's sentence was extended by five years after he was also deemed guilty of "insulting the sacred" (alleged blasphemy), requiring him to serve a total of 15 years in prison. While Pastor Victor and Kaviyan have been released on bail, Hadi and Amin remain incarcerated, with their bail terms substantially increased to about $100,000 CAD.

More recently, in June 2017, Pastor Victor's wife, Shamiram, was summoned from her home to a court at Evin Prison in Tehran where she was charged with "participating in foreign seminars" and "acting against Iranian national security." Both Shamiram and the pastoring couple's son, Ramiel, have been released on bail and are now awaiting trial. For additional reports on persecution in Iran, go to the Iran Country Report.

May all the Iranian Christians currently suffering persecution because of their faith experience the reassuring love of the Father, the presence of the Saviour, and the counsel of the Holy Spirit. Pray for the growing yet vulnerable Iranian church, asking the Lord to give His followers the wisdom, grace and strength they need to overcome the many difficult and dangerous challenges they face. Intercede for the nation of Iran as a whole, including all who rage 'against the Lord and His Anointed,' that many will come to repentance and surrender their lives to the One who gave His own for their eternal salvation.

VOMC provides support for underground church mission leaders who are overseeing a network of evangelists and missionaries dedicated to the bold yet wise proclamation of the Gospel to spiritual seekers. By funding television broadcasts, VOMC is also making it possible for a vast audience of viewers to be reached throughout Iran with the "Good News" of Jesus' love via satellite.

As the Gospel message goes forth over the airwaves, may the growth of the church continue to multiply despite persecution. Pray that the Iranian government will be open to change, allowing full rights and protection for its non-Muslim citizens as well. In the meantime, may those who are forced to flee the country find safe refuge and help so they can live in peace and worship the Lord with freedom.

Iran: I Forgive You