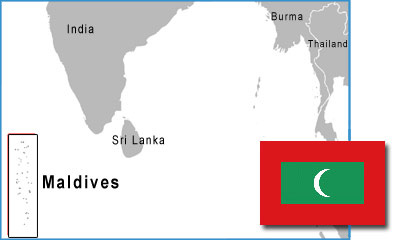 The Maldives, an Islamic Republic, is an archipelago of 1,191 islands in the Indian Ocean. Its culture is a blend of influences from southern India, Sri Lanka, East Africa and Arab countries. Islam is the only recognized religion, and strict adherence is strongly promoted. In order to minimize outside influence, foreigners are allowed only brief visits to the Maldives. Tourists, who freely drink alcohol and wear revealing swimsuits, are generally isolated from the everyday Maldives, where alcohol is outlawed and modesty is expected. The government faces a growing problem with youth gangs and heroin addiction. Many Maldivians live in poverty.

Maldives is one of the least evangelized countries in the world. The 0.2% figure for Christians refers to expatriate Christians. Citizens of the Maldives are automatically Muslim, and non-Muslims may not become citizens. The open practice of any religion other than Islam is forbidden. Maldivian believers are carefully watched. They suffer ostracism, mockery, incarceration and even torture. Christians cannot meet or read the Scriptures openly. Expatriate believers have been expelled, especially after sharing their faith.

Pray for Maldivians who believe -- for their protection and courage in the face of great trials and for opportunities to grow in and spread their faith.

Pray that the religious freedom of Maldivian Christians will be recognized.