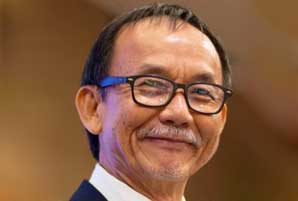 For more than a year, Malaysian pastor Raymond Koh has been missing. On February 13th, 2017, masked men forced his vehicle to stop, pulled him from the car, and then drove away with both vehicles -- all captured in broad daylight by CCTV cameras. Despite widespread distribution of the video footage, there have been no demands and no word on Pastor Raymond's whereabouts.

Just prior to his kidnapping, the pastor had been the victim of multiple threats, accusing him of preaching to Muslims. (Proselytizing Muslims is illegal in Malaysia, a country which declares that to be Malay is to be Muslim.) After Pastor Raymond's disappearance, family members expressed concerns that the police were investigating the accusations against him rather than searching for his kidnappers. (For a previous report on the abduction, please review this page.)

Last March, an Uber driver named Lam Chang Nam was charged with attempting to extort money from Pastor Raymond's family under the guise of providing the church leader's safe release. At the time, however, it was determined that he was not involved in the kidnapping but was rather an opportunist. In an unexpected turn of events, Lam was arrested last month and charged with the pastor's abduction.

Pastor Raymond's wife, Susanna, questions the motive behind the recent charges, as there are concerns about the way the investigation has been conducted. Despite those uncertainties, she is publicly issuing a plea for his safe return while thanking the Malaysian public for their support. "My wish is for Raymond to be released so he can be reunited with his family, especially (during) this Chinese New Year," expresses Susanna.

Bring your petition for this pastor's safe release before our loving God and Saviour, who is able to rescue His people from any danger (Psalm 91:14). Please also remember Pastor Raymond's wife, Susanna, and their family during this difficult time while they continue to wait with hopeful anticipation for his return. Additionally, join us in praying that the truth will come forth during the upcoming court proceedings and justice will be served.

Pray that Christians will stand firm in their faith, despite opposition

Pray that Malaysian Christians will be free to practice their faith in Jesus Christ.

Pray that all Christians in Malaysia will be able to freely access the Bible.

Malaysia: Christians tortured for their faith