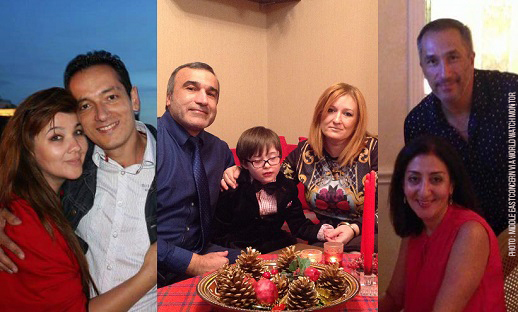 On Friday, June 24th, security agents raided an engagement party in Tehran, Iran, that was attended by three visiting guests from Baku, Azerbaijan: Eldar Gurbanov, Yusif Farhadov and Bahram Nasibov. Initially, about ten people were arrested, but most were soon released. However Eldar, Yusif, Bahram, in addition to an Iranian Christian, were taken to an unknown destination for interrogation.

Since their arrest, the Azerbaijani detainees were only able to contact their families once or twice. These men are being kept in solitary confinement, and consular officials from the Azerbaijan Embassy in Tehran have not been allowed to see them.

The families of the detained Azerbaijanis have issued an appeal for help and the safe return of their husbands and fathers.

Petition from the families of Eldar Gurbanov, Yusif Farhadov and Bahram Nasibov, arrested in the Islamic Republic of Iran on June 24th, 2016.

To Whom It May Concern:

On June 22nd, our husbands and fathers – Eldar Gurbanov, Yusif Farhadov and Bahram Nasibov – travelled to Tehran in the Islamic Republic of Iran. They were invited as guests in Iran to participate in an engagement ceremony and meet with their Iranian friends.

As we discovered later, they were arrested on the 24th of June by security agents during an engagement ceremony, and they have not been charged with any crime.

Eldar Gurbanov (48), Yusif Farhadov (51), and Bahram Nasibov (37) are all married and have children. Yusif Farhadov has a young son with Down’s Syndrome who is under his care.

Until now (July 26th), they have neither been allowed to meet the Azerbaijani Consul in Iran nor had any access to a lawyer’s assistance. They have not been charged with any crime and their future is unknown to all of us. We ask all who are concerned to help our husbands and fathers to return safely to their homes!

With respect and love,

Friends and family of the three detained Azerbaijani men ask for prayer for their welfare and release. They also request that petitions be sent to the Iranian Embassy accredited to your country or the Iranian authorities directly. A draft text for an email or letter, as well as contact details for Iranian authorities, are given below.

I am writing you to express my concern regarding the situation of three Azerbaijani citizens: Eldar Gurbanov, Yusif Farhadov and Bahram Nasibov. They have been detained in Tehran since June 24th, 2016, when they were arrested at an engagement party. So far no charges have been filed against them. Their sole purpose was to visit friends in Tehran who had invited them.

Their wives and children are very concerned for their welfare.

In light of Article 14 of the Constitution of the Islamic Republic of Iran, which requires that the government of the Islamic Republic of Iran treat non-Muslims fairly and respect their human rights, and in light of Iran's obligations as a State Party to the International Covenant on Civil and Political Rights, I urge the immediate and unconditional release of Mr. Gurbanov, Mr. Farhadov and Mr. Nasibov.

Thank you for standing with these three concerned families.