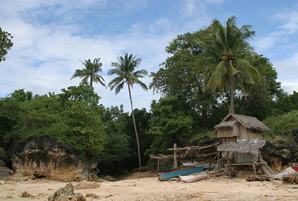 After a full three months of fighting, the Armed Forces of the Philippines are now in control of all but a half-kilometre grid square of Marawi city. To date, the battle has claimed the lives of 573 militants, 128 soldiers and police, and at least 45 civilians. The progress has been slowed and complicated by the fact that the militants -- those who pledged allegiance to the self-proclaimed Islamic State -- have planted numerous improvised explosive devices and retained civilian captives as human shields.

Just before midnight on August 3rd, four male hostages made a daring escape. Using a concealed mobile phone, they contacted the armed forces which organized a rescue of the men about one kilometre out into Lake Lanao. Escapee Rumar Marjalino attributed their success to God's intervention: "That night, not a single sniper fired his shot. Not a single sound was heard. We hurried until we reached the lake and were told to swim a thousand metres. Despite the heavy waves, we stayed together. God was there. God is good."

The men were reunited with their families on August 6th before being taken to Camp Don Basilio Navarro Hospital for a medical examination. En route to the hospital, they all stopped off at La Naval Chapel to offer prayers of thanks for their deliverance and remember the others remaining in captivity. The rescued men report that between 50 and 60 local and foreign jihadists are staying within Marawi's Grand Mosque, along with 46 civilian captives, of whom 20 are women and 13 are children (the youngest being only two years old).

When not out performing forced tasks for the jihadists, the hostages are guarded in the mosque by armed child-soldiers. The escapees also report that an abducted church leader, Father Suganob, is alive. Although they tried to convince him to escape with them, he refused to abandon the other captives. For more information on the crisis in Marawi, visit this page.

Ask God to preserve, comfort, encourage and deliver the remaining hostages. As they wait upon Him for deliverance, may His Holy Spirit uplift their heavy hearts and His angels surround them with divine protection and ministry -- reminding them that they have not been abandoned and are not alone. Pray also that the Lord will bless, sustain and supply all that is needed for the church members who are sacrificially opening their homes and expending themselves in order to provide aid to the displaced. During this crisis, may the persecuted believers in Marawi be reminded that they serve a God who "will supply every need...according to His riches in glory in Christ Jesus" (Philippians 4:19 ESV).

Pray for the Philippines

Pray for those in the various villages of Mindanao who have been victimized by rebel groups. May they not pursue any form of retaliation, acknowledging that vengeance belongs to God alone – the Righteous Judge. Instead, may these believers be granted His grace and strength to not only forgive the perpetrators but to also earnestly intercede for them. Let's join our Christian brothers and sisters by praying for a mighty outpouring of God's love and power to take place, compelling many more to seek repentance and salvation, for only then can His righteousness and justice truly prevail.