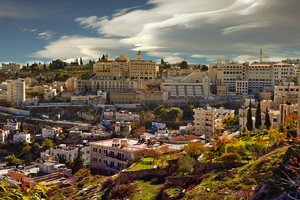 A hillside view of the West Bank

The Voice of the Martyrs is supporting Christian workers who are ministering to many new believers in the West Bank, an area where tensions remain high between militant Muslims and Christians. One of the new believers being reached is a young mother, "Mary," who not only has an eagerness to learn more about the Bible, she's enthusiastically sharing her new-found faith with family members.

Recently, the woman's young child fell out of a window -- more than 36 feet from ground level -- resulting in the hospitalization of her toddler who remained in a coma for two-and-a-half weeks. Although distressed during the ordeal, Mary willingly shared her Christian faith with doctors while her son was in the hospital, and also seized the opportunity to pray for the other sick children. Throughout this time, she held steadfastly onto her faith in God and, miraculously, her son eventually recovered.

Please join us in praying that Mary's faith will grow even stronger, and that her family and those who are being touched by her Christian witness will come to the saving knowledge of Jesus.

Pray not only for the peace of the land, but also for both Jewish Israelis and Palestinian Arabs to meet the Prince of Peace, as it is through Him alone that any meaningful reconciliation will come.

Pray Palestinian Christians who remain will stay strong in both their Christian faith and in their commitment to live out the gospel in very difficult conditions.

Holy Land Exodus - Where Have All The Christians Gone?