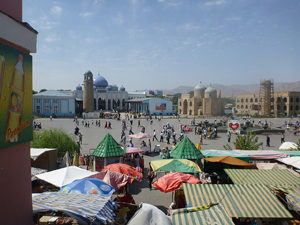 In early July, Pastor Bakhrom Kholmatov was sentenced to three years' imprisonment by the Khujand City Court in Tajikistan's Sogd Region for allegedly "singing extremist songs in church and inciting religious hatred." Officials have threatened the pastor's family, friends and church members with reprisals if they reveal any details of his case, trial or imprisonment.

The 42-year-old pastor of Sunmin Sunbogym (Full Gospel) Protestant Church (located in Khujand) was first held in custody by the National Security Committee (NSC) secret police after his April 10th arrest. (A report on his arrest may be reviewed here.) While on trial, Pastor Bakhrom had been detained at a police detention centre. However, he was more recently moved to an unknown prison.

The NSC secret police, together with the State Committee for Religious Affairs and other law-enforcement agencies, initially raided the church's affiliated congregations in Sogd Region in early February. Officials then closed down a church in the town of Konibodom in March after interrogating and torturing its members. In addition, the NSC officers pressured employers into firing these Christians from their jobs.

After Pastor Bakhrom's arrest in April, the Khujand church was also raided, and congregation members were harassed and physically tortured with beatings. Yet, there have been no arrests or trials of the officials who carried out the beatings, contrary to Tajikistan's binding international human rights law obligations under the United Nations Convention against Torture and Other Cruel, Inhumane or Degrading Treatment/Punishment.

In defiance of its international human rights obligations, Tajikistan severely restricts its citizens' rights to freedom of religion or belief. Additionally, authorities impose this ban without state permission. Due to the raids, interrogation and harassment, a large group of believers have also stopped attending church, as they are concerned about the possibility of arrest.

May greater courage and compassion be ignited in the hearts of Pastor Bakhrom, his wife and their children -- along with the members of these churches -- as they face various challenges with law enforcement officials. Despite the hardships encountered during imprisonment, pray that Pastor Bakhrom will continue to draw strength from our Almighty God, who alone is able to truly save and deliver (Psalm 34:17). Please uphold all the members of our Christian family in Tajikistan, asking the Lord, who is a mighty stronghold, to intervene on behalf of His persecuted people. Also intercede for the officials involved, praying that their hearts will be turned toward Christ through the living witness of these persevering believers.

VOMC contributed funding for two "English as a Second Language" (ESL) camps in Tajikistan, reaching 45 children (aged 10 to 15 years) during the first session and 55 teenagers at the second. Each of these overnight camps provided a safe and caring environment in which the compassion of Christ was demonstrated through both word and deed. Along with the provision of accommodation and meals during their stay, the young people were given conversational English lessons to help them build their speaking skills and confidence. The camp sessions included Bible lessons whenever possible, as well as interactive games and activities, providing them meaningful ways to learn the language and about their Heavenly Father who lovingly created them.

Pray God will provide for the physical needs of the people of Tajikistan.

Pray freedom of religion will be respected by the government.