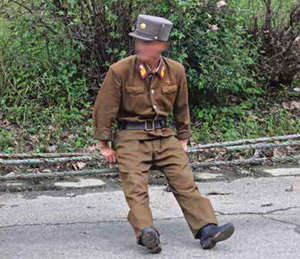 "Kyung-ja" first heard of God while suffering in a North Korean prison. Prior to her incarceration, she had escaped North Korea in an attempt to earn money in China for her starving family back home. When Kyung-ja returned, however, she was arrested. According to Todd Nettleton of VOM USA, while being interrogated, she was repeatedly asked unexpected questions: "Did people in China talk to you about God? Did you meet with people who are followers of God? Did you read the book about God while you were in China?" For Kyung-ja, this topic was completely new, as she had never before heard of God.

After facing interrogation, Kyung-ja was transferred to a labour camp. Intrigued by the interrogator's questions, she asked a fellow prisoner about God. This prisoner affirmed that there was a God but was too afraid to talk about Him in the camp. Even so, a seed had been planted in Kyung-ja's heart.

If even the guards were afraid of God, Kyung-ja reasoned, then He must be powerful. And so, despite knowing nothing about God, she began to pray and ask for His help. To her surprise, Kyung-ja began to witness answers to her desperate prayers.

Eventually Kyung-ja was able to again escape North Korea and connect with her daughter who had earlier defected to South Korea. Her daughter could answer many questions about God, Jesus and the Bible. When Todd Nettleton personally met Kyung-ja in South Korea, she was able to read the Bible and understand what it means to follow Christ.