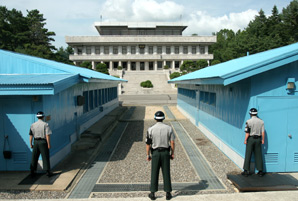 Panmunjom in the Demilitarized Zone

Three American prisoners were officially released from custody in North Korea on May 9th in a move widely viewed as a goodwill gesture ahead of a summit between the leaders of the United States and North Korea. The three men -- Kim Hak-song, Kim Dong-chul and Tony Kim -- were all being held in labour camps on charges of anti-state activities. They are all Christians who had been involved with various ministries in North Korea. The three had been transferred to a hotel earlier this month.

Recent meetings between the leaders of North and South Korea have been praised by many as a critical step towards peace. However, Dr. Eric Foley with Voice of the Martyrs Korea says such talks are empty if they ignore North Korea's human rights violations against its own people. When North Korean Christians were asked for their opinion on the talks, their response was, "This is not what we've been praying for."

Though the release of the three Americans is a positive move, 30,000 Korean Christians remain in concentration camps. Real change can come only through Christ. Dr. Foley states: "What we need to be praying for is what North Korean Christians have taught us to pray...for several generations. Pray for the transformation of the heart of the leader." To read the full interview, click here.

Pray that the heart of Kim Jong-Un will be transformed by the love and peace of Christ, and that he will come to understand his need for a relationship with the Living God. Continue to remember the many believers suffering in labour camps throughout North Korea. Uphold the ministry of VOM Korea and others reaching out to Korean Christians.