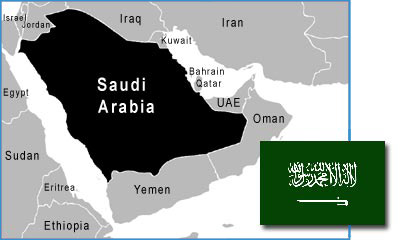 Saudi Arabia is the birthplace and homeland of Islam. Twenty percent of the national budget is allocated to the worldwide expansion of Islam, and the country's enormous oil wealth has financed global Islamic expansion with billions of dollars. Most Saudis follow the strict form of Wahhabi Islam, which is known for its contempt of non-Muslims, but there is a very vocal Shiite minority. The country has one of the worst human rights records in the world. In 2011 women received the right to vote, and in 2015 they will be able to run in municipal elections. But they are still forbidden from driving, conducting official business or undergoing certain medical procedures without permission from their male guardians. Saudi Arabia has been designated a Country of Particular Concern by the USCIRF since 2004.

Saudi Arabia is one of the most oppressive nations in the world for Christians. Religious freedom is nonexistent, and leaving Islam is punishable by death. Non-Muslims are not permitted to become citizens of Saudi Arabia, and no places of worship other than mosques are permitted in the country. All non-Muslim religious rituals and materials are banned. Converts from Islam to Christianity are rare, and converts have been executed for the offense. Anyone who performs mission work or converts a Muslim faces jail, expulsion, lashing, torture or execution. Non-Muslim worship, even private worship for foreign Christians, is prohibited, and Saudi religious police have been known to raid homes where expatriate workers were worshiping.

Please uphold the Christians of Saudi Arabia, who must secretly serve God in a country where intolerance and violence pose threats to their freedom of worship and personal belief in our Lord Jesus. May He personally take up their cause, working out His very best plans for their lives and future ( Jeremiah 29:11). Pray that He will touch the hearts of the country's authorities – and many others in Saudi Arabia and its surrounding nations – through the Internet and VOMC's evangelistic radio broadcast so that they may experience His wonderful plan of salvation as well.